My siblings and I grew up with Jenny as our neighbour on Royal Avenue. I remember every Halloween going to her house first and she always gave us our favourite - a little box of raisins:) She also always helped our family out in a pinch. My family still likes to tell the story of when I locked myself in my room age 5, and because my mom couldn't hear me downstairs I called my grandmother for help, she called Jenny, and Jenny actually came over, rang the doorbell and told my parents when they answered 'your daughter is stuck in her room please go save her!'

Dear Family Members, To all of you my sincere and heartfelt sympathy in memory of Jennie. I had the pleasure of working with Jennie for many years in the Auxiliary of Mount Sinai Hospital. She was such a dedicated , sincere and warm lady; a pleasure to have known and to have spent time with. May your treasured memories help you through these trying times. She is not forgotten.

Please accept our condolences on the passing Of cousin Jennie, may your memories be @comfort to you at this time. Sydney, Tracy, Stuart Becker.

Dear Malkie,Howard and your whole family, We are so sorry to hear of your mom’s passing. What a special woman Jennie was and we will remember her fondly. So happy we got to celebrate her 100th birthday with your family! Our sincerest sympathies,love Francine,Ian and Sylvia

Rhona and Harold Forester - 24 days ago

Our sincerest condolences to Malkie, Joel and family. I remember Jenny primarily as a sweet lady. She never had a bad word to say about anyone. She guarded her independence with a passion. She never asked for help, as she wanted to do everything herself so as not put anyone out. During the early 1940's, when I was only a baby, my family shared an apartment with Jennie and Hymie for about a year. Apartments were hard to find then because of the war. I still have some old photo prints that Hymie took at that time, that bring back memories. I will miss her. Our thoughts are with her though.

Dear Jordan and Family, I was saddened to learn of your great loss. Please know that my thoughts and heart are with you at this difficult time.

jordan ,my condolences on your loss of a special women. remembrance is loves greatest gift. may her soul rest in peace.

To the family of the late Jennie Berson, On behalf of the staff and management of Israel bonds, please accept our sincere condolences on the passing of Jennie. Our thoughts are with you at this difficult time. May your memories give you comfort, and may you be spared further sorrow. With our deepest sympathy, Israel Bonds

Dear Malka, Joel and families. Our most sincere condolences to the family. WOW how I loved your beloved mom. What a wonder she was, always smiling and telling jokes. I met her a couple of years ago in the fruit store and begged to drive her home with her parcels...absolutely not, the bus drops her off in front of her building! So independent, and a pleasure to speak to whenever the occasion arose. Of course the past year has been hard for everyone as visiting was non existent. She lived a full and wonderful live always bragging about her beautiful grandchildren. She was able to fill in the missing links of the family tree I was working on and the stories would go on for hours. Jennie you were a beautiful and memorable part of the large Monk family. You will be missed. Brenda, Danny & Goldie

Dear Marilyn and family A scintillating star that shone brighter than all of the others in the galaxy has now been extinguished. Your mother was an unfathomable well of kindness and a role model for us all. With her words. her deeds and her noble deportmen, she made the world a better place . Sincerest condolences, Allan

Rhona and Steve schneiderman - 24 days ago

Dear Joel, Malka, and families, Our deepest condolences on your sad loss. Aunty Jennie was my favourite aunt. We remember her fondly. May you be comforted by happy memories. May her memory serve as a blessing to all of you and may she forever bring a smile to your faces and fill your heart with love. Cousins Rhona and Steve

Charles and Sharon Freedland - 25 days ago

The loss of your Mother is traumatic no matter what her age or your age. Our condolences to you and the whole family, may her memory be a blessing, and may you have strength to cope with the coming days. 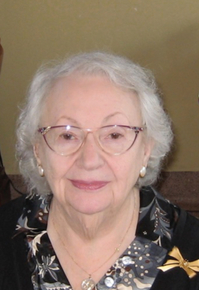 (née Monk)
November 30, 1918 - November 3, 2020
On Tuesday, November 3, 2020. Wife of the late Hyman P. Berson. Loving mother and mother-in-law of Joel and Josephine, and Marilyn and Howard Cohen. Beloved grandmother of Michael and Jordan Berson, and Kenneth Berson Cohen. Predeceased by her siblings and their spouses, Max and Jean, Abe and Molly, Fay and Max Dick, Fay and Julius Paisner, Rebecca and Harry Stern, Bertha and Manny Forester, Dora and Harry Gore. Daughter of the late Hyman Monk and the late Lena Ginsberg. Daughter-in-law of the late Elik Berson and the late Toba Polonsky. Devoted and beloved aunt and cousin to many. Survived to four weeks short of her 102nd birthday thanks to her sense of humour and her stubbornness.

Growing up during the Great Depression made her strong, resilient, resourceful and very caring to those needing help. She took care of her own and Hy's parents, and many others in the extended family when they were ill or in need. Her biggest concern whenever she was ill was that people were coming to visit her in the hospital. That was HER role, and she never wanted to be a burden.

Creative and artistic talents helped her to repurpose used household items long before modern eco-consciousness was a thing. She baked and decorated sculptural cakes. She sewed ballet and Halloween costumes. She helped many times with typing long homework documents.

She was chief, cook and bottle-washer for Hy's business, the Camera Clinic, as well as keeping our home "Clean enough to be healthy, dirty enough to be happy."

She was known for her sense of humour and sometimes ribald jokes. She had great stories from her childhood, especially the "Sheik of Araby" play she and her siblings put on, and the story of "Chick-Chick."

She loved food and would always try to feed her visitors. Please have something sweet to eat in her memory. And pet a cat if you have one handy.

Jennie is a tough act to follow and a wonderful role model of a wife and mother. She made sure to send Hy off to work every day with a long embrace and kiss. She was an integral part of Michael's and Jordan's lives. To a very young Kenneth, she was "Bubby! Penny!" And wonder of wonders, she recognized then-customer Howard as someone her married daughter should come and have a look at, tempting fate. It was not meant to be that night, and a divorced Malkie and Howard were thrown together perhaps a decade later. It was Bashert, but how did she know?

Jennie touched many lives during her century+ among us, all in a good way. She was an active volunteer with the Mount Sinai Hospital's Women's Auxiliary from her early 30's well into her 90's. She spread her love around freely, and it has flowed back to her during her last days. Her family appreciates all the well wishes and condolences. We have been counting our blessings to have had her with us for so long. She left on her own terms, looking forward to being with Hymie again.

Many thanks to Cora, Sharon, Shale, Anne-Marie and Rose for their affection, comfort and support over the last year, and especially during the Covid lockdown when family members were not allowed to visit.

A private graveside service will take place. It would honour Jennie if those who wish would donate to the Women's Auxiliary of the Mount Sinai Hospital Center, 514-369-2222 or www.sinaimontreal.ca.

Leave a condolence for Jennie Berson