Dear Joseph and Victor(and your Levy family) Sorry to hear about Uncle Henry, we only Found out today. Our deepest condolences. We have fond memories of him and he was Loved by my late mother Rebecca and all Of us. Our Past roots will live on in all of us And hopefully in our kids. We should be darn Proud of our background and the family That we had, they were amazing.

Dear Sara, Adam and Family, My sincere and heartfelt condolences on the loss of your grandfather, father, great-grandfather and uncle. May his spirit always be an inspiration and surround you with love

My most heart-felt condolences to Sara & Adam Ray & family.

Dear Victor, Joseph, Susan, Nicole and family, We are saddened to learn of Henri’s passing. In many respects, he was one of those larger than life characters who leaves you with indelible and colourful memories. Apart from our professional relationship, we have been friends for over 50 years and neighbours in TMR and Boca Raton for many years. He was immensely proud of his children and grandchildren. Although we have not seen Henri in a while, he and our cherished Marcella were never far from out thoughts and they will never be forgotten. May you be spared further sorrow. David and Donna-Lee Kauffman

To Susan and Sara and the Levy family my deepest condolences.

Jack and Linda Kivenko - 20 days ago

Dear Joseph, Victor and family, Our thoughts are with you during this sad time. Henri was a most interesting individual to spend time with. We are very sorry to learn of your loss.

Dear Victor and Joseph, Please accept my heartfelt condolences on the passing of your dear father. My thoughts are with you at this difficult time. Joel

Meyer and Connie Oiknine - 20 days ago

Our deepest sympathies for your loss.

Dear Levy family It is so difficult to express our emotions at a time like this. Henry was such a strong person with clear values and important ideas. We hope that the memories of his accomplishments and love will carry you forward and help you through your mourning. May you find comfort with your family and the many expressions of respect. May his life’s energy flow into the stream of eternal life

My sincerest sympathies to the entire Levy family on the loss of a very fine man and wonderful father, grandfather and great-grandfather who was so loved. Sherry

Dear Susan & Joe & family Our deepest sympathies on the loss of your beloved father. We wish you strength at this difficult time. May you be comforted by all the family memories and inspiration of his life. Sincerely, Gloria & Rick

Dear Joseph, Sara and family, Lennie and I send our sincerest condolences to you and your family. I remember Henri as being a truly fine gentleman. We are so sorry for your loss.

Dear Joseph, Victor and Family, My sincere condolences on the loss of your Father. May the memories you shared live in your hearts forever. Sheldon

Dear Joseph, Susan and Levy family, I have great memories of meetings I had with Henri years ago in my office. A very charming and interesting man. My sincere condolences to all of you on his passing Hersh

Joseph and family, thinking of you in your time of grief. It’s very hard to loose a parent. You have so many years of family time spent together....cherish those memories.

Brahms and Vivian Silver - 21 days ago

Dear Joseph and Victor, Your father was a man from a world of Kings and Princes. He brought the flavour of Egypt to Canada. May his soul rest in peace.

Liliane and Elie Levy - 19 days ago

Dear Victor. Joseph and Families. Our deepest condolences for the death of your dear father. he was a great man. may you find comfort in the memories. Liliane and Elie Levy

Dear Victor, Joseph and families My heartfelt sympathies on your loss. May your memories help you through these trying times. Baruch Dayan Ha’Emet

Jane and Larry Plotnick - 21 days ago

Our most sincere sympathies. We know that it is so very difficult to lose someone so close, especially a father, and irrespective of age. We are certain that he will live on in the hearts of everyone who knew him. Our hearts go out to you and your entire family. May you all find the comfort in those memories that are yours to cherish always, and strength in the family and friendships of those who share this loss. May special blessings be with you and yours today and always.

Dear Joseph & Victor my deepest sympathies to you and your families

Sincere condolences for your loss 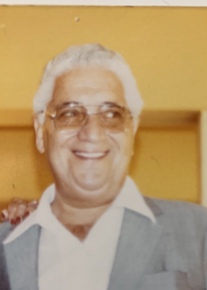 Leave a condolence for Henri Levy