Mark and Deb Bernstein - 6 days ago

Dear Ann, Ken and Richard, My sincere condolences on the passing of your mother. Sonia meant a great deal to me as I was growing up spending a lot of time in your home . She kept a close eye on Richard and me, trying to keep us out of trouble, usually a futile effort. Thinking of you all.

Dear Saxe family, I am saddened to learn of Sonia’s passing. Sonia and Saul were good friends of my parents Margaret and Mickey Albert. I have fond memories of your mother, a beautiful and classy lady who was my travel agent for many years when I lived in Montreal. A few years ago she kindly gave the Albert kids a packet with letters my dad sent to Saul during WW2, when my dad was in the army overseas. Sonia had kept those letters for over 70 years. I last saw her at the funerals of my parents a few years ago. My sincere condolences for your loss, Isabel Albert.

My Condolences to Sonia’s family. She was a great lady with style and flair. Blessings to all.

Dear family - While my name is not familiar to you, your Mother and I have been friends for many many years. We met at Club Med while we were both fledgling travel agents. My late husband and I took an immediate liking to her and so it has remained. I hope that your memories of your Mother will sustain you. I spoke to your Mother only 10 days ago, so her death leaves me very sad. I wish you all well

Dear Ken, Ann and Richard. Your mom was certainly a very dynamic and energetic person Impressive indeed! Remember all of our youthful experiences at uncle sol and aunt Francis in the sixties ! Was also impressed with your dad with his fond interest in photography! Great childhood memories of kind people! May you know of no more further sorrows !

Dear Family....Aunt Sonia was a very big part of my life as she particularly loved her niece Esther. I grieve with you at our loss and will miss her . We often enjoyed such good times with her and you all, I wish you a long and healthful life full of wonderful memories, Love and sadness....Maurice Kershaw..Montreal

I am so sorry for your loss. My mother, Yetta Goldberg adored your mom, as did all of the Goldbergs.

Dear Kenneth, Ann, Richard and families. I remember Sonia on Gray Avenue, skiing and being a beautiful mom. She was open, welcoming, loving and always of good humour. She had a life well lived and will be remembered by all who had the good fortune of having ever spent time in her company. I wish you all a long, health and joyous future.

Sonia and I went back a very long way and shared some wonderful Times together, both when our kids were young and again in more recent years. My thoughts are with you all. Lila

I knew Sonia for over 60 years. I have known her as only the oldest and best friend of her daughter Ann could. Evidenced a life well lived. My deepest sympathy to the entire family.

Jocelyn and Jerry Cooper - 16 days ago

Dear Richard, Angela, Kenneth and family, We offer you our most profound sympathy! Jerry remembered your mom from way back when he visited her home on Duquette Street with Bubby Bluma. Jerry’s mother Rose and Sonia were first cousins. It was one of his very favorite places to visit. As an adult he had lost contact, but coincidence renewed their friendship, and I was to benefit from knowing and loving Sonia! We visited with her in Florida and Montreal and got to meet her in Richard’s home when we lived in Peterborough. She was a pleasure to be with and to talk to. We spoke with Sonia very recently – it must have been just before she took sick. Sincerely, Jocelyn and Jerry

To the family I had the honour of meeting Sonia and spend a lot of time with her while travelling on our tours. She was beautiful both inside and out. I enjoyed every minute spent with her and spoke with her this past Passover. May all your wonderful memories sustain you at this difficult time.

Dear Ann and Family, I was saddened to read of the passing of your Mom. I remember her from growing up and we talked about her at the Westmount High Class Réunion a year ago. Long life to you. Janis

I am so saddened to read of the passing of your mom. Without a doubt, she lived life to the fullest every single day. I had the pleasure of spending time with her when my mom, Tillie Schwartz, was alive. May your many memories hold her close to your heart.

Very sorry to hear about your mother’s passing. My parents and yours were friends for many years. My sincere condolences to all the family

Dear Richard, Ann, Kenneth and families: We were very shocked and sad to hear of Sonia's passing. We remember meeting her for the first and (unfortunately) only time at Neil Davis' wonderful Shabbat family dinner in Montreal when we visited Canada about 3½ years ago. A truly exceptional woman. May you know no more sorrow. "המקום ינחם אתכם בתוך שאר אבלי ציון וירושלים ולא תוסיפו לדאבה עוד" Your cousins Ahuva and Steve in Jerusalem, Israel.

Dear Richard, Anne, Kenny, We learned today of the passing of your Mother. She was the youngest and, as far as I know, the last of that great band of friends that were the adult role models I remember from those growing up years. I am grateful that Sharon had the occasion to visit Sonia, at the same residence where Sharon’s aunt resides, in recent years. We miss her and those good times. Love, Ed & Sharon

Please accept our condolences on the loss of Sonia. She was so well versed on so very many topics.....you could have a discussion with her on almost everything. She was loved by all our family. Linda Reich and Vicki Veroff

To Sonia's Family: Please accept my deepest sympathy and heartfelt condolence on the loss of your Matriarch... she was a warm, interesting, and gracious lady that I met one day on the golf course and we became friends... Long life to all... ~E~

My deepest sympathy to Sonia's family. She was a beautiful lady with a beautiful smile and a gracious manner. It was always a pleasure to be in her company. She will be missed. Beatrice Levine

Marion and art levitt - 17 days ago

Dear Saxe family. We have been friends of Sonia over 20years. She was a great lady. May she Rest In Peace.

Dear Richard, Kenneth and Anne. I have such fond memories of your mom. She was always so gracious and charming. And beautiful!!!! Sending virtual hugs for everyone. Love Sari

Dear Anne and Sonia's family, I feel blessed to have known Sonia. She was a true, loving, helpful and loyal friend. I shall miss Sonia. Wishing all of you good health, Sadie.

My most sincere condolences to Richard, Kenneth & Anne. Sonia was my most Dear friend for almost 65 years until my most recent conversation with her about a week ago. I loved her dearly & will miss our weekly chats & occasional visits enormously. Rest in Peace my very dear friend.

Dear Ken and Anne, my deepest sympathy on the passing of your mother. I have fond memories of her from my youth. Bruce. 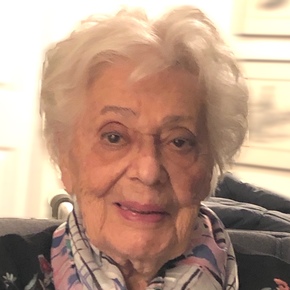 On Thursday, May 7, 2020, after a mercifully short bout of COVID-19, six weeks short of her ninety-eighth birthday. Sonia enjoyed a long, healthy life, with style and flair. Born in Montreal, July 1, 1922 to Samuel and Eva Levine, she was the baby sister to Fanny, Janet and Sol. She was a proud Montrealer and Canadian (born on Canada Day). Sonia married Saul in 1945, who was the love of her life until his death in 1975. Sonia immersed herself throughout her life in music, opera, art and books; she was a voracious reader until the end. She took classes in art, history, and politics. She travelled the world, including a cruise to Antarctica. Sonia embraced the digital age and became proficient in using her tablet. She recently participated in a family Zoom Seder and also began attending on-line Shabbat services from the Shaar Hashomayim. Sonia was a gardener, skier, water-skier, and golfer. She even tried parasailing behind a motorboat in her late fifties. Sonia adored family gatherings, particularly Thanksgiving at Richard and Angela’s home in Tamworth. She loved a feast.

Sonia is survived by her children and their spouses Richard and Angela (Jouris) of Tamworth, Ont., Kenneth and Barbara (Kohn) of Montpelier, Vermont and Ann and Gary (Kushnir) of Vancouver, BC, grandchildren and spouses Michael and Dena, Philip, Sarah and Brian, Adam and Marta, Joshua and Jessica and great grandchildren Aron, Riley and Robin as well as numerous nieces and nephews throughout Canada and the USA.

We would like to acknowledge the staff’s exemplary care, attention, kindness, and consideration throughout our mother’s brief stay at the Verdun Hospital. A private graveside service will be held on Sunday, May 10. Shiva will be observed individually. In lieu of flowers, please consider donations to MAZON Canada, 1-866-629-6622, or another charity of your choice.

Leave a condolence for Sonia Saxe