Words can not say how very sad I am to hear of Howard’s passing. He was so helpful to me when I first met him and Bianca in their pharmacy in Stowe and when they left to move back to Canada I felt that I could no longer visit Stowe as it would never be the same. My thoughts are with Bianca and family at this sad time.

My deepest sympathy to Howie's partner and children. I met Howie 40 years ago and have nothing but good memories of him. He was an intelligent, kind, and compassionate man being who left this world a better place and left it far too soon. Rest in peace Howie.

Hello Bianca, and Alter Family, Please allow me to find the words to express how sad I feel for you all, and also how sad I feel for The Boys. I loved Howie, so much and for forever. I can easily find the memory of visiting Howie for a BBQ and being no taller than the wheel of my fathers car. Exiting the vehicle at Howie's house was a test of strength and of courage because no sooner had your feet touched the ground when a pack of enormous black, barking, slobbering Newfoundlands would surround you. Then in the blink of an eye I would be plucked out by Howie the Mountain Man himself. The Alpha. He would hug me, laughing and smiling and telling me that the dogs were just making sure we were safe and it was clear that I passed the test. He made me feel special every single time I was around him. Many years later on the very same day The Boys were leaving for a trip I was outside my house taking with the kid who lived across the road who had invited me to attend his LCC graduation that weekend. The van pulled out of the drive way and you could hear The Boys inside, all raucous and rowdy excited for their trip. They slowed to a stop in front of us and the window was lowered, Howie's voice called out "Allison! Don't forget to show him your Daddies Shotgun!", and then all the boys roared with laughter and sped off. I knew this was a joke but that poor boy didn't. I can still remember the panic in that kid's eyes. Needless to say I was very safe that weekend, not a soul touched me. I have a bunch of those stories and I feel so very very fortunate. The Boys are a pack. A pack of Alpha's. Today they mourn the loss of one of their own and together they will weather this storm. I am so sorry and so sad for this loss, but I am lucky to be able to remember Howie the way that I do. He was strong, caring, hilarious and kind.

Dear Alter family, My deepest condolences on Howard's passing. I used to pop into the Stowe Pharmacy just to catch up on the latest gossip. He always had a story to tell. He will truly be missed. May your family know no more sorrow. Irwin

My sincerest condolences to Bianca and the Alter Family. I have fond memories of Howie during university - many hours of studying together - skipping classes to go skiing... Howie was a true friend and mentor and I was saddened to hear of his passing.

stanley and Rhoda Shames - 22 days ago

Dear Bianca. Our condolences to the loss of Howard.

Dear Arlene and Alter family, please accept my condolences on the loss of Howie. May your special memories comfort you at this very sad time. Lois

Dear Bianca and family, please accept my sincerest condolences on your loss. Howie was always a very special person. We are thinking of you during this very difficult time.

Dear Bianca Toffolo: May his memory be for a blessing. Leonard Pleet

Dearest Bianca and the entire Alter family, I was very saddened to hear about Howie's passing. He adored his wife, Bianca, his children and entire family. Howie was a lover of life. His dogs were his best friends. He was a master pharmacologist. May his kindness and consideration for everyone he met stay in our hearts forever. Rest in Peace, Howie. Sincere condolences from Angelo and Anna Maria Stabile and our entire family.

barbara and Jerry Goffman - 23 days ago

Dear Arlene and family: Our sincere condolences on the passing of your brother-inlaw. Our thoughts are with you Barbara and Jerry

Dear Bianca, I’m sure you don’t remember me, but we met quite a long time ago. I’m Ivan Bell’s sister and although I haven’t seen Howie for many years, he was a regular visiter to our house on Légaré Street when I was a kid growing up with an older brother whose friends were regulars at our house. Howie was always kind and patient with the most adorable twinkle in his eyes. He always had the time to talk to his friend’s younger sister, which was me. I remember well his love for dogs, especially his first, who he took with him everywhere whenever he could. Howie was a gentle kind of guy who I knew as a kid and who I will always remember. I am so very sorry that he is no longer with you and I send you my deepest condolences.

Dear Mrs. Toffolo Alter to you and the Alter family On my behalf and all your past students from ND de la Défense & Saint-Philippe Benizi our most sincere condolences. Our thoughts and prayers are with you during these difficult times.

Denise and Sheldon Popliger - 24 days ago

Dear Bianca and Alter family, Words can’t express how sorry Allan and I are for your loss. Howie was a unique and remarkable man, in so many ways. May you be spared further sorrow. With love Trudy

Dear Bianca and the Alter family, please accept our sincerest condolences on the passing of Howard. He always had a wonderful disposition, kind spirit, and a very warm heart. He was one of the best and favorite cousins and he will be greatly missed. Joan and Murray Meitin

Dear Bianca, please accept my condolences on the loss of Howie. I can honestly say that I can sympathize having lost my father, Howie’s previous roommate, only last week. There is nothing to say to ease the sadness other than that we can hope that they are at last free from the confines of the situation they endured for too long. My best to you for peace in the time to come.

I just want to extend my sympathy to the Alter Family on the loss of Howard. I do know he was a kind special gentle man and I am sorry for his loss.

Mrs Bianca Maria Toffolo Alter and family, please accept our heartfelt condolences on the loss of your beloved Howard. Myself with all past students of Bénizi/la Défense (FB Group) are deeply saddened. Our thoughts & prayers are with you. 🙏🙏🙏

Awww I am so sad to read about Howard’s passing. 😢 It was always a pleasure to have coffee with both Howard and Mel at 333 Chabanel. My sympathies to the family. So sad.

Sincere condolences to the Alter family on the passing of Howard. We were schoolmates and friends at Northmount High. He was always the smiling person who loved to joke around. I remember bringing him montreal bagels when I went to Vermont which he appreciated greatly. He was a true mensch and a wonderful person.

To the Alter family. Sincere condolences. Howie and I spent 4 years together in pharmacy school. He was a true gentleman. May the family be spared of any more sorrows. Bryant Levy

Dear Bianca and Family, My deepest condolences on Howie’s passing. He was a kind gentle man and we will remember him fondly. May G’d give you strength through these difficult times.

Dear Bianca, Adam, Suzanne: Shawn, Melissa, and I are so sorry for your loss. I have such wonderful memories of Uncle Howie and what a wonderful person he was. We are thinking of all of you during this difficult time.

Millie Pearson and family - 25 days ago

Dear Bianca , Arlene and family. I am so extremely sorry on the loss of your beloved Howie . It is such a difficult situation in the best of times. And in today’s time unimaginable. Bianca I know how dedicated you were to Howie over all these years especially since he was at the Jewish and than at Eldercare I saw the love. Stay strong stay healthy and know I would have come to the funeral at a different time. He will be in good company with Mel and Donnie where they can Discuss all their formulas and where they will be looking after all of us in this world. Sending u hugs

Dear family Of Howard Alter: We are deeply saddened to hear of the passing of an extraordinary good and kindly man, your beloved husband and father and grandfather, Howard Alter. I met him only once, at his pharmacy in Stowe, I had an acute medical problem, on a weekend and had no one else to turn to. As long as I will live, I will remember how he helped me and I bless his memory. I am so sorry that I never saw him again and am distressed that he ended up at the Jewish Eldercare at a young age. Please know that we are feeling your loss and may his memory always give you comfort, strength and inspiration. Rachel and Issie Shanfieldq 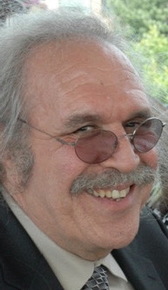 On Wednesday, April 29, 2020, at the age of seventy-three, at the Jewish Eldercare Center in Montreal. A pharmacist for 45 years in Montreal and Vermont and an avid trainer of Newfoundland working dogs for decades, Howard leaves behind his beloved wife Bianca Toffolo, who was with him when he passed, his daughter Suzanne and son Adam as well as his three grandchildren, Savena, Liam and Gabriel, his sister-in-law Arlene (his brother, the late Mel), nieces, nephews, many cousins and a group of special lifelong friends. Son of the late Sarah Grossner and the late Frank Alter. Howard was always one to follow his own path. A charismatic and affable man, Howard would talk for hours on any subject with anyone and would consider it time well spent. The family would like to thank the staff of Jewish Eldercare (K-3, C-3 and A-3) for their tireless care, dedication and many acts of kindness, particularly in these difficult times. A private graveside service will take place Monday, May 4, 2020. Donations in his memory may be made to Donald Berman Jewish Hospital of Hope Eldercare Foundation, 514-738-4500 ext. 2124 or to the S.P.C.A. Montreal, (514) 735-2711, ext. 2240.

Leave a condolence for Howard Alter