Dear Marlene and Rona, May deepest sympathies to you and your family. Your mom was a very special lady. She was a kind and gentle soul. May your memories of Shirley be a comfort to you. Debbie Hochstadt Lazarovic

Howard and family, Thinking of you in these very strange and difficult times.

To the family of Shirley Schwartz, On behalf of the staff and management of Israel Bonds, please accept our sincere condolences on the passing of Shirley. Our thoughts are with you at this difficult time. May your memories give you comfort, and may you be spared further sorrow. With our deepest sympathy, Israel Bonds

Dear Marlene, Rona and Howard, Sincerest condolences on the passing of your mother. It is true that she always had a smile, a good word and treated people warmly. The closeness our mothers shared over many decades, right up to and including their outdoor 'tea times' on nice afternoons, will not be forgotten. May you and your families be comforted by her memory..

I knew Shirley from the times when we were members of Pioneer Women -N a'amat. She was so affable, so pleasant to meet and talk with, indeed an example of "noach labriot". May her memory serve as an example and an inspiration. Miriam Cohen

Dear Marlene and family, Our deepest sympathy on the loss of your mother, may you be spared further sorrow. Your memories of her will keep her always close to you. Carolyn Broda and Allan Wax

Dear Marlene, My deepest condolences to you and your family. May the family be spared any further sorrows.

Dear Howard and family, From across the years I offer my deepest condolences on the loss of your mother. I have happy memories spending time in your house where I was always treated warmly.

Lela and Moshe Fishkin - 22 days ago

Dear Marlene, Rona and Howard, We are so sorry to hear about your mom passing away. Growing up, she was always there, with her ready smile and kind words....always! My mom told us stories of her childhood, taking walks with her "older" cousin, Shirley. I know that she absolutely adored and loved your mom, just as we all did. She will always be in our hearts. May your Mom's memory be blessed for eternity.

Dear Marlene, Rona and Howard, So sorry to hear about your mom. I always remember her with her sweet smile, and she was such a close friend with my mom. My thoughts are with you all.....

Dear Marlene, Murray & I were so sorry to hear about your mom. Our thoughts are with you and your family during this difficult time.

Dear Family. So saddened to learn of Shirley's passing away. It was always a pleasure having her join in on Steger's Saturday Mega Bingo an event she enjoyed very much. We have never seen her without a smile on her face. Our thoughts are with you at this difficult time. Our deepest sympathy. She will be missed by all. RIP dear Shirley. Al & Doris (Steger Mega Bingo)

Sorry to hear of Shirley's passing. Always had a smile on her face. Used to live at the Steger.RIP

My deepest condolences to the family.

Sincere sympathies on the passing of your mother. I remember her fondly from long ago, and had an opportunity to visit with her at Steger that left me feeling the embrace of her warm and kind nature once again. May you be strong together at this time.

So sorry to the family on the loss of a very special women. greeted everyone with a beautiful countenance of love and respect. She was a long time member of Pioneer Women along with my mother and many other very dedicated individuals. Baruch Dayan Emet 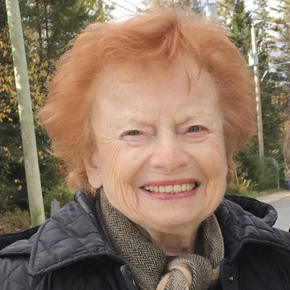 (née Rotblatt)
It is with great sadness that we announce Shirley’s passing on Sunday, June 14, 2020, in her ninety-fourth year. Loving wife of the late Sam Schwartz. Deeply cherished mother of Marlene (Christian), the late Sandy, Rona, and Howard (Rajni). Much loved Bubby of Melanie, Bram and Tetyana. The youngest daughter of the late Ann and the late Mayer Rotblatt. Dear sister and sister-in-law of the late Pearl and the late Max Gorin, the late Ted and the late Fay Rotblatt, the late Abie and the late Irene Rotblatt, the late Eli and the late Isabelle Rotblatt. Sister-in-law of the late Mollie and the late Sam Albert, the late Esther and the late Mark Newman, the late Harry and the late Frances Schwartz. Shirley will be sadly missed by her nieces, nephews, family, and friends. Always smiling and cheerful, Shirley was loved by everyone that knew her. Devoted to her family, Shirley had a big heart and always had room for everyone. As she lived her life, her credo was «bechesed - to be kind», which she repeated often to family and her many friends at the Steger residence. The family extends their sincere gratitude to Shirley’s truly exceptional caregivers at the Steger Residence and Personal Touch, especially Daniela Popa, for their devotion, compassion and for helping in these special circumstances. A private graveside service will take place. Donations in Shirley’s memory may be made to the Segal Cancer Centre c/o the Jewish General Hospital Foundation, (514) 340-8251.

Leave a condolence for Shirley Schwartz