The fun and education we had together,Harry taughted me business, I taught him to stay away from the Wild side of life Glad I knew him and shared Sorry you had to go Thanks

Dear Geoffrey, please accept my sincere condolences on the loss of your father.

Dear Geoffrey, I am very sad to learn of your dad's passing. I wish you great strength during this difficult time and always know that I am here for you. Steven Byer

Dear Geoff, I was so sad when you told me your father passed! You were the most wonderful son possible! I witnessed the love and care you gave your father everyday. My heart and thoughts are with you at this sad time.

Dear Geoff, My thoughts are with you during this very sad time. Harry was a mensh.

Dearest Geoffrey, My condolences on the passing of your dad Harry. I have many fond memories of your father, quietly laughing at our antics, helping us out on projects and being a loving father and husband. You are blessed to have had such a lovely human in your life for as long as you did. Peace and love, Randy (Ronia)

Dear Geoffrey, I am so sad to hear of your dad’s passing . My sincere condolences on your loss . Your parents were great neighbours . I loved the chats with your mom on the front porch while your dad tended to his gardening . He was a quiet , wise , kind and witty man . I occasionally bumped into him when he would be at Cummings . I saw his wonderful sculptures at their art shows . As a neighbour , he always kept an eye out to make sure things were running smoothly across the street , and it was much appreciated . May the memories you made together bring you comfort in this sad time . X

Dear Geoffrey & Family, my deepest sympathies on the loss of your dear father. May your wonderful memories be a comfort to you at this difficult & sad time. My thoughts & best wishes are are with you. Fondly, Cheryl XO

Geoff, you and Harry have been in our thoughts frequently, especially since your visit last summer. We were so blessed to see you both. We will miss Harry dearly, sending all our love.

Dear Geoff, So sorry to learn about the passing of your father. May you take comfort in all the wonderful memories you shared with him. My sincere condolences for your loss. Xo Heidi

Dear Geoffrey and family, All my sympathies on the loss of your father. I hope all your memories comfort you at this difficult time.

Dear Bess, Marty, Mitch and Sheldon. My deepest sympathies on the loss of your beloved Brother, Brother in Law and Uncle.

Dear Geoffrey, It has been many years.... I would like to wish you and your family my sincere condolences on the passing of your father.

Dear Geofrey. It was an honour and pleasure to have known Harry. He had great hiking stories. Geoffrey you were an amazing son. Gary Pancer

Dear Geoffrey, Just wanted to extend my sincere condolences on the loss of your father. Thinking of you at this time. Carol Lesser

Dear. Geoff. And. Family. My. Sinceres. Condolences on. The. Loss of you. Dad

Dear Geoff and Family, It was a Pleasure to get to know HARRY as a Neighbour and as a Workout Buddy at the Bristel Gym. Please Accept my Most Sincere Condolences. Syd.

Dear Geoffrey Bess and Marty. We are so sorry to hear of Harry’s passing Our deepest condolences during this very difficult time Geoffrey you were a wonderful son and took such good care of your father. Iris and Ben Waxman

Dear Geoff, my deepest sympathies on the passing of your Dad . May good memories be a source of comfort to you.

Eileen and Mendy Waxman - 26 days ago

Dear Geoffrey, Bess and Marty, our deepest condolences on the loss of Harry. We are thinking of you at this difficult time. May you be spared further sorrow. Eileen and Mendy

Dearest Geoffrey, I am so sorry at your dad's passing. He was a very special man to me. Helped me patch up my 10 year old car so I could drive it for another 2 or 3 years. He was always teaching me and lending me his tools so that I could take care of the back yard. I think of him every time I drive by the old house because he helped me tack some fabric on a piece of furniture that still sits in the front entrance. He was a quiet, gentle and kind man. Though I haven't seen him since your mom died he is forever a part of me. My sympathies are with you and your family always. Much love Shari

To Geoff & the entire family.... Bonnie & I wish you no more sorrow. I went way back with Harry.

Dear Bess & Family: So sorry for the loss of Harry. Please accept my sincere condolences.. My thoughts are with you at this very sad time. Cynthia

Dear Geoffrey, my condolences on your loss. You were a devoted son. My thoughts are with you. (Garage neighbour)

Harry & i were in the same Sculpture class at Cummings, for several years, an accomplished excellent artist, he was always helpful & i learned a lot from him, my condolences to his family, Lenny Smith

Dear Geoff, We are so sorry to hear the loss of your dad. We are so glad that we got to know him and spend time with him later in his life. May his memories be a blessing to you. Linny & Howie

I’m so sorry for your loss. I hope your many memories of him give you some comfort.

Geoff, I’m so sorry for your loss. Your dad sounded like a wonderful man, I hope your many memories of him give you some comfort.

Pam and Mitch Kravitz - 27 days ago

Geoff - We are so sorry for the loss of your father. Please accept our heartfelt condolences during this difficult time. It's never easy losing a loved one, but even harder when you have such a close and special relationship. We hope that the wonderful memories you have made together will comfort you in the days ahead.

My deepest sympathies. We worked together at Metropolitan Stores many years ago. Harry was a gentle kind , multi talented. May he Rest In Peace.

Dear Geoff, I was deeply saddened to read about the passing of your dear dad. We worked together for several years. My heartfelt sympathy to you and your family. Claire

Geoffrey (Wax), I am saddened to hear of your dad's passing. My hope is you find comfort in the sweet memories you have of him and a life well lived. Harry was a true mensch! His kindness and gentle manner were a huge influence on my life. I have so many fond memories of time spent with him and the gifts of wisdom he imparted to me. On the day I met him I knew I could learn a lot from him. Who couldn't from a man that found the humour in his son taking flight over the handle bars of his 90cc Kawaski dirt bike. He will be greatly missed, his warm welcomes, his quick wit, his encouragement and support, and most of all his example of living life to the fullest, optimistically, and enjoying the simple pleasures life has to offer. He will always be with me.

Dear Geoff,I am so sorry your Dad passed away.He was always a special uncle to me.I loved talking hockey with him.I will miss him. shel

Geoff, I will always cherish the memories of your visit to Saskatchewan last summer. Uncle Harry so enjoyed the adventure and the family loved him! May Harry Rest In Peace. Keeping you close.

Dear Geoffrey and the Waxman Family: Please accept my heartfelt sympathy on the loss of your beloved father .Your unforgettable, intelligent, late mother Shirley Schwartz Waxman and I shared a friendship that began in grade school and endured throughout the the years. May you and your family be spared further sorrow.

Dear Geoffrey my sincere condolences on your great loss.Harry and I were in the same class in public school, he was always a mensch and a kind person.Rest in peace Harry. Your long time friend IZZY

My Deepest Sympathy at loss of your father 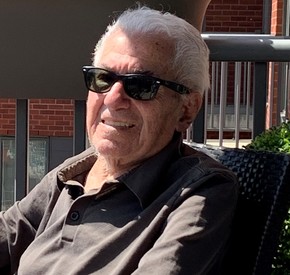 It is with great sadness that we announce the passing of Harry Waxman on Thursday, August 27, 2020, in his eighty-seventh year, after battling leukemia for almost three decades. Husband of the late Shirley Waxman. Beloved father of Geoffrey. Dear brother and brother-in-law of Bess and Marty Segal, the late Louis and the late Rose Waxman. He will be deeply missed by his entire family, including his niece, Marlene Salmers, and nephews, Sheldon and Mitchell Kravitz. Son of the late Louis and the late Fanny Waxman.
Harry had a thirty-five-year career as a women and children’s fashion buyer and retired at sixty to find his passion as a sculptor. His works are now displayed all over North America and enjoyed by many. Harry spent his last few years fulfilling his bucket list: dozens of trips to Mount Royal, sailing on the biggest cruise ship in the world, travelling to Saskatchewan to visit his family, trips to Florida and spending time at Quebec and Ontario lake houses. He was a consummate gardener and lover of the arts in his own quiet way, which were beautifully interpreted and depicted in his sculptures. Donations in Harry’s memory may be made to the charity of your choice.

Leave a condolence for Harry Waxman