I have known Bunny since I was 5 years old. Long enough to have many, varied memories; of humour, of caring, of devotion and of love. And he was such a good man. It did not occur to me that he would ever die, I am so very sorry that you have lost him.

Dear Annie and Family, We are saddened to learn of the passing of Bunny and extend our deepest condolences.

Dear Myron, to you, your dear mum Annie and sister Teresa, I remember all of you most fondly. Bernard was a joy. I send wishes to ALL the family, for strength and courage. I know that your fabulous memories of your Dad will carry you through these difficult days.

Ann, Teresa and Myron, So sorry to hear the sad news of your Dad's passing. We shared so many wonderful memories on the streets of McMurray and your Dad was a big part of those days, right from the very beginning. Our deepest sympathies to you and your families. Ruth, Steven, Mark & Eric Chaimberg

Marilyn and Bill Schreiber - 6 days ago

How so sad to read of Bunny's passing. We've known him for 100's of years. He was a real mench. We send you one and all our most heartfelt condolences on your great lost.

He was a nice man to us kids ,showed us direction ,good coach and inspiration

Dear Teresa, Eric and Anja, My deepest condolences on your loss. Best, Gloria

Dear Teresa, Eric, Anja and your entire family, Please accept our deepest sympathies during this difficult time. May his beloved memory serve as a blessing to you all. Love Jamie, Jacqueline,Zakary and Lily

Dear Teresa, Eric, Anja and family. Our condolences on the passing of your beloved Father & Grandfather. Keep his memories alive forever. May your family be spared any further sorrow.

Dear Myron and family - Our deepest condolences on the loss of Bunny. Our thoughts are with all of you at this most difficult time. Jennifer, Howard, Adam, Ryan, and Dylan

Dear Annie, Theresa, Myron and family Mark and I are so sorry for your loss and extend to all of you our heartfelt condolences at this sad time. Our thoughts are with you. Fondly Bluma and Mark

Dear Theresa, Anja, Eric and family So sorry for your loss. Since we were kids, Anja always shared such wonderful stories about her grandfather. I hope you will find comfort in such memories and knowing that his contributions to his community and country will be remembered. Love, Jane and family

My sincere condolences to the Breslow family. May all your wonderful memories sustain you during this trying time

I can still see Mr. Breslow sitting on the third base line at Centennial Park making sure we were all doing our job on the baseball field. In those days, not many Dads came out to support their kids, but he never missed a game! My sympathies to Myron and the family.

To my mind Bunny was “man of the year” every year. To the family my deepest condolences. Today Bunny is organizing a new and better club in Heaven!

Dear Annie, Libby and all the family. My deepest condolences to all of you on the loss of Bunny. I have wonderful memories of having spent time with Bunny (the two Bunnys) on many occasions. May many wonderful and happy memories sustain all of you during this most difficult and sad time. Bunny Lecker

Dear Breslow family, My condolences on the passing of “Bunny”. I have nothing but fond memories of him at our home and in synagogue . He was a very kind man, and always supportive May he rest in peace

My condolence to the Breslow fam. It was a pleasure knowing Bunny He was always happy to see me and will be greatly missed R.I.P

Dear Annie: I send you my deepest sympathy and heartfelt condolence for the loss of your beloved Bunny... I send the same to his children and grandchildren for their loss... as well to Libby and to his nieces and nephews who were part of his support system...I wish you all Long Life filled with good health, fond memories and the courage and strength to go forward to the New Year that awaits us...Fondly, ~E~

Dear Annie, Teresa, Myron, Anja, Elenore, Eric and Barbara, and the rest of the family... I was so so heartbroken to read the news this morning of Bunnie’s passing. Even though he had reached the age of 100, it seemed he would be with us forever. What a mensch! A true gentleman... always a pleasure to be around and to talk with. I am so glad we got to be included in your family celebrations and spent the Jewish holidays with you. It meant so much to Raphael and me, My deepest condolences.. truly the end of an era... May his memory be a blessing.

Teresa, I’m so sorry for your loss

Mr. Breslow you were a true mench! You made my first head band!! You had such a life of riley! Always positive ,happy always pleasing your customers..what a smile on your face! I will always remember your happiness to please your customer..your funny laugh! You were a true gem! You made everyone feel special! May you rest in peace and more importantly may everyone learn from you! B.d.e 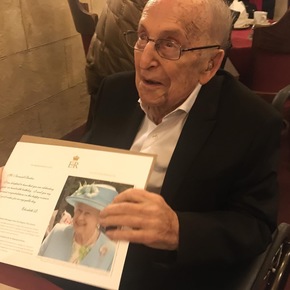 After spending over one hundred years with us, it is with great sadness that we announce the passing of ‘Bunny’ Bernard Breslow on Saturday, September 12, 2020. Devoted husband to his beloved wife of seventy-three years, ‘Annie’ Ann Volodarsky-Breslow. He will be remembered and sorely missed by his daughter, Teresa Capel and son, Myron Breslow; his granddaughters, Anja Capel, and Elenore Breslow; his son-in-law, Eric Capel and daughter-in-law, Barbara Breslow. Beloved brother-in-law of Jack and Natalie Voldar; Libby V. Labell and David Wayne, the late Bill and the late Sally Voldar, and the late Howard Labell. Predeceased by his siblings and their spouses, Jack and Yetta Breslow, Mona and Joe Kolber, Abe and Teddy Breslow, Rose and Sam Horowitz, Beloved uncle of Evie and Murray Rosenberg, Mitchell Labell, Shelley Polo (Rick), Joel Voldar (Marcie), Jason Labell, the late Ina Voldar, and Michael Breslow; and all of his great-nieces and great-nephews.

Bunny proudly served his country in the navy during World War II. He went on to work in the fur industry for his entire adult life. A founding member of the Beth Zion Synagogue, and the Côte Saint-Luc Senior Men's Club. The City of Côte Saint-Luc awarded him with numerous awards in recognition of his more than twenty years of volunteering within the community. Active in his youth, he remained an avid golfer well into his 80’s. Above all, Bunny was a devoted family man. He would do anything for family, and always had time, and energy to spare for his children, and granddaughters. He will be greatly missed.  Shiva private, please contact family for information. Donations in his memory may be made to the Montreal Children’s Hospital Foundation, (514) 934-4846.

Leave a condolence for Bernard Breslow