Stanley Sacharen - about 4 hours ago

Our condolences to the Ritter family. Chani and Stanley Sacharen

Dear Rovena, I was so sorry to hear the sad news of Martin's passing. You are one of my closest friends and in my thoughts. May your fond memories of Martin be a comfort to you. --Rita

My sympathies to Rovena and the Ritter family. Marcel was a good friend

Dear James and Family My sincere condolences on the loss of your father. He was always so nice to us growing up. Nadine and Gilles

Dear Ritter family, I’m so sorry for your loss. Martin will always be part of the memories I truly cherish of spending Jewish Holiday’s with the Ritter’s. Martin’s past and your family’s journey so closely resembles that of my parents and it especially hits close to home. My thoughts are with you.

Dear Rovena and family please accept my sincere condolences on the passing of your beloved Marcel. Having been neighbours for many years I remember so well the positive interactions we had in those good old times. I hope that the many good years you had will help you deal with your present difficulties and sadness. Keep strong. Paula Bultz.

Dear Rovena and Family, Our thoughts are with you at this very sad time. With deepest sympathy, Esther and Ron Paritzky

Dear James, my deepest condolences to you and your family. Very sorry for your loss. Your father was a gentle man and always very nice to me as we were growing up. Wish you all strength and courage. Deepest sympathies. Ouriel

Stephen and Wendy Rhodes - 16 days ago

Dear Efraim To you and your family our sincerest condolences on the passing of your father. In the months to come may you find solace in wonderful memories you have shared. Sincerely sent Stephen and Wendy

Dear Riovena , Michael and family, Please accept my deepest condolences on the passing of your husband and father. I remember how he was a true gentleman. Wishing you strength during this difficult time. Mimi Cohen

Dear Michael and Family, I am so sorry to hear of the passing of your father. My sincere condoles to everyone.

To the entire Ritter family, I was so saddened to hear of Martin's passing. I have so many great and lasting memories of him at family dinners and holiday celebrations. My thoughts are with you.

Dear Wolfgang, Yarra and family, We are so sorry for your loss. Please accept our most sincere and sad condolences.

Steve and Judy Rothstein - 17 days ago

Dear Efraim and family We are sorry for the passing of your father. May you be spared further sorrow. May you remember all the good times that you shared together.

Rachael and Howard Render - 17 days ago

Rovena, Rachael and I were so saddened to hear of Martins passing. He was such a kind man and we will always remember how helpful he was with all condo matters. We are thinking of you and your family at this time.

Dear Mike, We are truly sorry to hear of the loss of your father and are sending our condolences, thoughts, love and strength to you and your family during this difficult time. Mattie & Jessica

Mike and Family , We are so saddened by your loss .... please accept our deepest condolences in this very hard time

Naomi and I, along with our boys want to share our condolences with Rovena. Mikey, Efraim, Oded and Volfie, after the sudden loss of Martin. Our thoughts are with you all at this difficult time.

Dear James & Karla,Tony and I want to send our condolences on the loss of your father.Unfortunately I never had the pleasure of meeting him,But I have heard many stories of wonderful holiday celebrations with Alison and Armando .

Susan and Larry Ginsberg - 17 days ago

Dear Efraim and family, So sorry for your loss. May he Rest In Peace. We are here for you Efraim during these difficult times. Susan and Larry Ginsberg

Kathy and Shawn Shulman - 17 days ago

Dear Mike, We are so sorry to hear about the passing of your dad. Please accept our heartfelt condolences. May the memories you have help you get through this most difficult time.

Dearest Rovena and Family, We are so saddened to hear of Martin's passing. Ileana and I have such wonderful memories growing up in each other's home and then you were so warm to Cliff when we started dating and then married. We are thinking of you . May all your cherished memories help you during this difficult time.

Dear Rovena and family, Yosefa and myself are deeply sad by your loss. We cherish nice memories of Marcel who was truly a very kind and pleasant person. May his memory be a blessing to you and the entire family Sincerly Yosefa and Yossi Lazar

The Rosen Family - 17 days ago

Dear Efraim and the Ritter Family, Please accept our heartfelt sympathies for your loss. Sending love, thoughts and prayers to all of you during this difficult time.

Dear Rovena, Efraim, James, Michael and Family, I was so shocked and saddened to learn of Martin’s passing. He was, first and foremost a gentleman, a lovely, intelligent and soft spoken man who always showed respect for everyone.. He will be missed by all who knew him. Warmest regards and condolences, Roz

Dear Rovena & Family, Our heartfelt condolences on the loss of your beloved Martin. Our thoughts and prayers are with you at this most difficult time. May his memory comfort you in this time of sorrow. May you be spared further sorrow.

Keren and family: sending you condolences

Lee and Steve Shulman - 17 days ago

Dear Michael, our heartfelt condolences go out to you and your family on the passing of your Dad May loving memories ease your loss and bring you comfort. Lee and Steve

Dear Mike, Please accept my condolences on the passing of your dad. Jason

Rubin and Judy Eisman - 18 days ago

Pat and Jack, Harriet and Zavie, I remember the good old days on Trans Island with Micheal. Please accept our sincere condolences and know that we are thinking of you at this difficult time. Rubin and Judy

Our hearts go out to you during this difficult time. May his memory always be a blessing . Our condolences to the entire Ritter family.

Dear Ritter family, My deepest sympathies on the loss of Marcel. I remember your family very fondly as you lived upstairs from my in-laws, the Sohmer’s, for many years. May the memories of Marcel comfort you in this time of sorrow.

Dear Rovena, Efrain, Michael, James and Ritter family, We are so sorry about your dad. He was a warm, loving and wonderful man and we always looked forward to spending the holidays around the table. When he was in Florida. We will miss you. Armando, Alison, Jordan and Evan

Dear Rovena and Ritter family. Sending you our deepest condolences on the loss of your beloved Marcel. May you know of no more sorrow. Claire, Freddy Braseliten and family (Nantel neighbors)

Dear Rovena and Ritter family, Jeffrey and I send our most heartfelt condolences , Martin was always kind, respectful and friendly. We hope that your good memories can ease the terrible loss. BDE . Yona & Jeffrey Corber

Zahava and Itzik Knecht - 18 days ago

Our deepest sympathy to the entire Ritter family. May you never have sorrow again.

To ALL Ritters, and Rovena especially, I and Mondy are absoluteli devastate for the sudden passing of our good friend Martin. We wish you all to be spared of any more sorrow, He was a very delicate soul,compasionate and considered of others, and always listen and share ones problems.R.I.P. my friend

Ben and I were so sad to hear of the passing of Martin.We wish the whole family our condolences.Efraim,James,and Michael had a wonderful father and Rovena a wonderful husband.

Dear Wolfie, Yaffa and family, I was sorry to hear of the loss of your brother. Our thought are with you. Claire and Javk

Mariana and Miki Farkas - 18 days ago

Our heartfelt condolences on the passing of your dear husband Marcel.

To the entire Ritter family Benita & I convey our most sincerest and heartfelt condolences. We were saddened to hear of the sudden loss of Marcel. Since I have been friends with Oded for over 45 years, I have had the privelage of sharing many good times with the family. From being kids to adults, In Montreal or Florida, we shared a special bond. Just recently, I stopped by to check on them, say hi , and have a social distance chat. True to Marcel’s nature, he was glad to see me, ( upset that I left work) and made sure to ask about my children and granddaughter. My thoughts are with the entire family. To James (Oded),Karla, Abby, & Jacob, Benita & I can only imagine how difficult it is for you to be so far away, and to deal with travel restrictions. Our hearts go out to you in your time of sorrow, and we send you all our love. 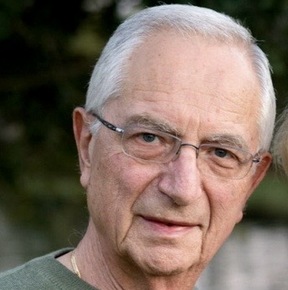 October 13, 1935 - September 5, 2020
It is with broken hearts that we announce the sudden passing of our father, Marcel Ritter, on Saturday, September 5, 2020.  Survivor of WWII, Marcel was the firstborn son of Miriam and Jacob Ritter of Czernovitz. He was a proud, dedicated, and loving father, father-in-law, husband, brother, brother-in-law and grandfather. We will miss him immensely. He was a gentle and quiet soul who absolutely loved jazz. He and his wife, Riva (Rovena), just celebrated their sixtieth anniversary. They fled Romania in 1961 and had a child, Efraim, in Italy en route to Israel. In Israel, they had another child, Oded (James). Marcel bravely fought in the 1967 war and later that year immigrated to Montreal where they had a third son, Michael.  Marcel raised a loving family, became a professional accountant and rose to become comptroller at Schering Pharmaceuticals until his retirement.
He is survived by his wife, Rovena, their sons, Efraim, Michael (Fay), Oded (Karla) and grandchildren, Abigail and Jacob, as well as by his brother and sister-in-law, Wolfgang and Yaffa, their children, Danny, Keren (Howard), and their grandchildren, Olivia, Emily and Mikayla.; his sister and brother-in-law, Melita and Yosef of Israel, and by their children, Nurit, Orna, Ehud and their families. Donations in Marcel’s memory may be made to the Jewish General Hospital Foundation, (514) 340-8251.

Marcel has left us with great memories and life lessons that we will cherish, and will always be in our hearts.