So sad for all of you. Shmuel, I remember your smile when you talked of your grandmother. Thinking of you. Sandy

Dear Helen, Murray and family. Sincere condolences on your loss.

Dear Marvin and family, Our sincere condolences on your loss. From Carly Surkes and Sonny Surkes

Marvin and Allegra and family, please accept our condolences on your loss. We know your family is going through a very hard time right now and our thoughts are with you. Moishe and Louise

Dear Helen, Murray and family, Please accept our deepest sympathy on your great loss. Our thoughts are with you at this very difficult time.

Dear Stenge family I was deeply saddened by Margrit’s passing, she was a good friend back at Pinegrove and then at bridge in CSL. Please accept my deepest condolences, she will be greatly missed.

My deepest sympathies to the family. I met Margrit in 2015 through the Montreal Holocaust Museum. She kindly skyped with my dancers who were performing a ballet piece about the Holocaust. Margrit stayed a part of my life ever since, corresponding regularly by email and meeting in person in 2019. I will forever remember her. While we were only in each other's lives for a short while, she meant so much to me. I'm sending all her family and friends love and prayers.

Deepest condolences on the loss of your beloved mother. I remember her so well from St. Laurent/Talmud Torah days as a smiling, gracious woman. May her memory be for a blessing.

Dear Stenge family, our deepest sympathy to you on your great loss. It was always a pleasure to see Margrit at the bridge table. Always so sweet and friendly.May the wonderful memories you have give you strength at this difficult time. Fondly Carole and Allen Spector(bankers pen)

Dear family Stenge, I was so sorry to hear of the passing of both your parents. Seymour and I played bridge with them for over 25 years in Florida, every sat. night. I will remember them fondly. Marilyn Issenman

Dear Helen, Mottie, and the entire Stenge family: It is unbelievably sad that I am once again writing a condolence note, now about your Mom. From reading all the notes, she was indeed a wonderful and very smart lady. It was most interesting to hear her life story told by the Montreal Holocaust Museum. Stay strong.

To The Family, I knew Margrit from the bridge club. Often I would see her in the parking lot proudly taking out her walker never wanting help. Let your memories give you strength. She was a kind soul. Bonnie Marcus

Dear Marvin and Allegra. So sorry for the passing of your mother, Marvin, especially within such a short time of losing your father. Very sad indeed. My thoughts are with you at this very difficult time. Please accept my most sincere condolences. Barukh Dayan Haemet.

To the Stenge family sending my condolences on the passing of Margrit. I saw her regularly at the Bridge Club. Michael Efraim

To the family of the late Margrit Stenge, On behalf of the staff and management of Israel bonds, please accept our sincere condolences on the passing of Margrit. Our thoughts are with you at this difficult time. May your memories give you comfort, and may you be spared further sorrow. With our deepest sympathy, Israel Bonds

Dear Marvin and family - My sincere sympathy on the passing of your Mother and your Father. My memories of them are wonderful. We spent many years together as very good friends. There is no way to replace a Mother. I do hope that in time, it will be the good memories you will retain of both your parents. They were quite special.

Dear Marvin and family, So sorry to hear of your loss. Wishing you comfort through these trying times. BDE

Fran and Barry Rishikof - 28 days ago

Dear Marvin, Helen & families, the loss of a parent is always sad but to lose both mom and dad in such a short period of time is heartbreaking. I have many memories of babysitting at their home and then later Mom and I played bridge together for several years. May your memories sustain you at this sad time.

We are deeply saddened to learn of the passing Margrit Rosenberg Stenge z''l, Holocaust survivor, exceptional volunteer speaker, and cherished friend of the Museum. Margrit was born in 1928 in Cologne, Germany, and her family was forced to flee the country in the late 30s due to increasing antisemitism. They tried to rebuild their lives in Oslo, Norway, but were forced to move several times due to the Nazi invasion and persecution of Jews. After hiding in and around the remote mountain village of Rogne with the assistance of their neighbours, Margrit and her family eventually escaped to neutral Sweden with the help of two young Norwegian students. She met her beloved husband Steven in 1948. They married a year later and moved to Montreal in 1951. Margrit was an outstanding volunteer speaker at the Montreal Holocaust Museum since 2011, where she shared her story with thousands of students. She was particularly gifted at speaking to young people. She was profoundly dedicated to Holocaust education and often stated that she wanted to share her story for as long as she could. As recently as last week, Margrit was in contact with the Museum about Holocaust remembrance projects. Margrit’s remarkable story will live on through the thousands of young people whose lives she touched, the recorded testimony she entrusted to the Museum, her memoir written with the Azrieli Foundation, and most notably, with her beloved children, six grandchildren and twenty-two great grandchildren. As her touching photos in the exhibition Witnesses to History, Keepers of Memory depict, Margrit was a woman of great kindness, warmth, and elegance. We will always remember her generosity, compassion, dedication to family, and her unshakable belief in the importance of Holocaust education. She will be greatly missed. The Board of Directors, volunteers, and professional team extend their sincere condolences to the Stenge family, Marvin (Allegra), Helen (Murray), as well as their grandchildren, and great-grandchildren during this difficult time. May her memory be a blessing and a source of inspiration. Richard Schnurbach, President and Daniel Amar, Executive Director

sincere condolencess on your loss. I have fond memories of years in St Laurent and the time working for Hadassah WIZO

Dear Marvin, Helen and Families. My condolences on the loss your Mother so soon after your Father. What a great and sincere couple with a heart of gold. Cherish the memories as an inspiration to everyone. Baruch Dayan Ha"Emet. Bernie Chmielash

Isaac and Jacqueline Dana - 28 days ago

Dear Marvin and Allegra and families Harvey and I extend our heartfelt sympathies on the loss of your beloved and Mom and your Dad who passed away a very short time ago. It is so hard to say good bye to a parent , but try and take comfort that they are together again as they have been for 71 years . Cherish all the fond memories as I am sure there were many and may your families be spared further sorrows. Gena Ray and Harvey Finkelstein

Dear Marvin, Helen and families, Once again, we are deeply saddened, this time on the passing of your beloved mom, grandmother and great-grandmother, and by the tragic loss of both your parents in so short a time. They were an amazing couple and wonderful neighbours for us, and we were so blessed to have our connection with them continue long after their move from St. Laurent. May your lifetime of cherished family memories with them always be a source of comfort to you. Our thoughts and prayers are with you at this sad and difficult time. Fondly, Sandy & Lenny & family

My deepest condolences to the entire family. May her memory bring you comfort and strength during this difficult time.

Dear Marvin, Motti and family. We extend our most sincere condolences at this time of grief. We send you our love.

Deepest sympathy on the loss of a beloved mother, grandmother and great grandmother. We have the pleasure of owning their condo and think of them both fondly. Bryna and Norman Heimlich

Dear Children, My heartfelt condolences to the passing of your mother . She was born in the same city I grew up in Germany. But most gratefully I acknowledge that she translated my beloved father s diary into English! Forever grateful! Ilana Fine

Our sincere sympathies on the loss of your mother and so soon after your father’s passing. May your memories of them both and of happy times together sustain you. ‎הַמָּקוֹם יְנַחֵם אֶתְכֶם בְּתוֹךְ שְׁאַר אֲבֵלֵי צִיּוֹן וִירוּשָׁלַיִם Susan and Alain

Jan and Doug Whitford - 29 days ago

Dear Helen, Murray, Erin and Ben Please accept our sincere condolences in the loss of your parents and grandparents Margrit and Steven. You are in our thoughts and prayers at this difficult time.

To the Stenge Family: My deepest condolences for your loss. I am sorry that you have to go through this process again so shortly after the passing of your father and grandfather. May the memories of good times spent together comfort you during these difficult days. BDE

Dear Marvin & Family Our sincerest condolences onthe passing of you mother. This must be heart breaking for you. May God comfort you among the mourners of Zion and Jerusalem.

To Helen, Marvin and families my deepest sympathy on the passing of your mother, Margrit. She was a wonderful person and a great friend. She will be missed immensely. Beatrice

Baila and Jerrold Aspler - 29 days ago

Dear Marvin and Allegra, We were sorry to learn that your mother passed away so soon after your father's death. As you are still mourning the loss of your father, may you be strengthened by the cherished memories that you shared as a family. Baila and Jerry Aspler הַמָּקוֹם יְנַחֵם אֶתְכֶם בְּתוֹךְ שְׁאַר אֲבֵלֵי צִיּוֹן וִירוּשָׁלַיִם

Dear Helen and family, So sorry to read about the loss of both your parents. I remember them fondly when I spent time at your house during high school, ...so kind, so classy, so fine. May you have no more sorrow.

Dear Marvin and family, Our deepest condolences on your shocking loss of both parents! How very, very sad!

Dear Marvin & Allegra, My sincere condolences on the passing of your mom. Losing both parents in such a short time has to be devastating. My thoughts are with you at this sad & difficult time. Fran

Dear Marvin, My condolences on the passing of your Mother. Warren and Natalie Green

Dear Marvin, Helen and Family, There are no words to express my sadness for this immeasurable loss so soon after losing you father. I hope and pray that you will be comforted by thoughts of good times past. May both your parents memory always be a blessing. Sincerely, Abby

Fran and Seymour Kula - 29 days ago

Dear Marvin, our deepest condolences to you and your family on your profound losses. Fran and Seymour

to all of Margrit,s family.... so sad to read that Margrit did not make it...she will be missed.....a feisty, intelligent lady.....now she has joined your father.....my most sincere sympathy......

Mitchell and Fany Ettinger - 29 days ago

Sad to have to offer condolences twice in such a short span. Our thought are with you at this time.

Dear Marvin, Helen and family, my deepest condolences on your loss. My thoughts will be with you at this difficult time. May your family be spared further sorrow. Steven 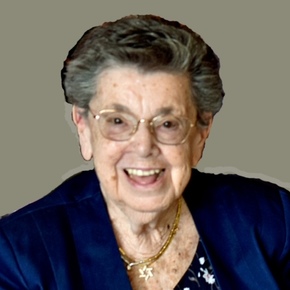 Peacefully, on Saturday, February 6, 2021, in her ninety-third year. Beloved wife of the late Steven for seventy-one years. Loving mother and mother-in-law of Marvin and Allegra of Israel, and Helen and Murray Teichman of Toronto. Cherished grandmother of Motti and Sarah, Shmuel and Raizel, Shoshana and Roi, Asher and Dassy, of Israel; Erin and Mike, Ben. Proud great-grandmother of 22. Private graveside service to take place. Shiva strictly private. Donations in her memory may be made to the Montreal Holocaust Museum, (514) 345-2605.

Leave a condolence for Margrit Stenge