Tom I am so sorry for your loss. Fate brought Our parents together and their friendship kept them close. I remember your mother calling me up to inquire about this or that or just because she wanted to see how I was doing. And of course the way she was insistent that I bring all my dates to the restaurant for 'inspection. Robi P.S. I posted the news on a Facebook group, and you should be surprised/proud on how many people remember your mother with fondness. She touched a lot of souls

Dear Tom and Family. I would like to express my heartfelt condolences on the loss of your Mother. Our families have been connected for so many years and I will always remember her as a the strong, original, independant and charismatic lady that she was who left a profound impression on everyone who met her. She will be sadly missed. May you and your family be spared future sorrow.

Tom, Leah, Michael & families you were blessed to have a mother & grandmother such as Georgina. Although I didn't know her very well, I know you, Tom, and thus can only think she must have been special to have such a devoted, loving & good person such as yourself. My condolences to you all. To Georgina, cheers to a life lived with gusto, strength & charm.

So sorry for your loss. We have many fond memories of your Mom. Colleen and Betty

Esther and I were saddened to read the news of Georgina's passing. I was just reminiscing of her the other day, maybe a message that she was sending me so that she not be forgotten. Our sincere condolences to all the family, JP and Esther

Dear Tom and family, I'm sorry to read about your mother's passing. I remember what a devoted son you were. I'm sure her passing leaves a great void. My sincere condolences. Geri Shaw

I remember Tom making regular frequent visits to his mom way back when we worked together downtown. Marilyn remembers Mrs Schwalb's presence at the Pam Pam. May her memories be a blessing.

Dear Family of Georgina, I am sorry to read of the loss of your Mother; I enjoyed her so much years ago on my regular visits to the PamPam; she was very charming. May all your wonderful memories ease the pain of your loss. Bunny Berke

My condolences to the family. I am so sorry for your loss. I remember your Mother from the Pam Pam . My family were regulars and Georgina was always there, a lovely warm person.

Tom, so sorry to hear of your loss. May your family be spared any futther sorrows

Leah, My condolences on the loss of your grandmother.

What a charming, gracious lady! I, too remember her from the Pam Pam. If my husband and I missed more than two weeks, we would be greeted with,"I was so worried about you!" they don't make them like her anymore. May her memory be forever green and rich! Miriam Cohen

Dear Tom, Leah,Michael and families, Our sincere sympathies on the loss of your very special Mom,grandmother, and great grandmother. My children always told me what a special woman she was not only by their words but by their actions and kindnesses towards her.Sending you virtual hugs. Eileen and Victor

Dear Tom & Family- My deepest sympathy on the loss of your dear mother & grandmother. She was very fortunate to have such a devoted & selfless son. May all of your wonderful memories give you strength. I remember the Pam Pam, with its elegant hostess well!

Dear Tom, Leah, and Michael, I never thought this painful day would come, that I would be writing these words of condolence. Georgina was eternal. A one of a kind, special, intelligent, sharp, and witty woman, she left those who crossed her path in awe. Her stories, recollections so vivid you felt you lived through them yourself, were something to look forward to. Deeply painful and emotional at times, intriguing and humorous at others, they were always fascinating. The book of her life was opened to me years ago, yesterday the last chapter closed. Rest in peace Georgina. You will be missed, and forever in our hearts. Much love from all of us

I remember this special lady from Pam Pam, where she seemed to hold court. Eating there was a wonderful experience and I thank her for helping to make that experience possible. May she Rest In Peace.

Robyn and I send our deepest sympathies to Tom, Leah, Michael, and the entire family. Georgina was a force and a constant. An elegant lady always yet overflowing with chutzpah! She had such a rich history that she generously shared with us. Georgina will forever be in our memories and our hearts. 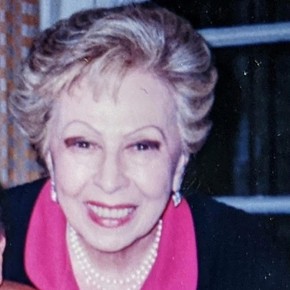 It is with deep sadness that we announce the passing of Georgina Schwalb (née Juer), on Tuesday, April 6, 2021, at the age of one hundred-and-one. Wife of the late Andor Schwalb for fifty years. Daughter of the late Alexander and the late Maria Juer. Beloved mother and mother-in-law of Tom Schwalb and partner Faigy Grzeda.  Loved deeply by her two grandchildren, Leah (Philippe St-Jean) and Michael, who both fondly referred to her as “Anyu” and known as the dear “Gina” to her great-grandchildren, Ben, and William.

Georgina, a Hungarian Holocaust survivor, came to Montreal as a refugee with her husband and young son in 1954, escaping the Hungarian Revolution.  The family worked hard to remake their lives in Montreal, and Georgina was proud of her position as the manager of the legendary ‘Pam Pam’, Hungarian restaurant where she was manager for twenty-five years. After retirement, she adored traveling with her husband, spending her winters in Florida, which she continued to do well into her nineties, and being surrounded by family for Sunday dinners.

Georgina will be sadly missed by Audrey Roussel, Josie Montserrat-Howlett, as well as by her family, friends, and all those whose lives she touched. Her strength, courage, intelligence, independence, charm, and devotion to her family were remarkable. Georgina will be in our hearts forever. Special thanks to Bernadette as well as to Judy, Dorothy and Maryse for all their care and kindness. Contributions in her memory may be made to the Cummings Jewish Centre for Seniors, (514) 734-1825.

Leave a condolence for Georgina Schwalb