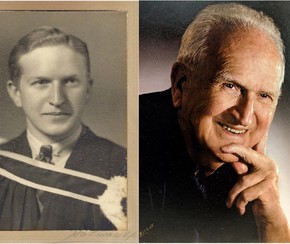 It is with profound sadness that we share the news of Lou's passing after a brief illness on Tuesday, April 6, 2021, in his one-hundredth year. Beloved and deeply missed by his children and their spouses: Coco and Doug Chute, Kathy and Michael Miloff, Margo and Alan Peterson; his grandchildren, Daniel Johnson and Heidi Khoe, Benjamin Johnson and Samantha Starek, Eli Miloff, Emma Miloff, Julia Peterson; by his great-grandson, Toby, as well as by his many friends, colleagues and mentees. The family is immensely grateful to a family friend, Dr. Sandra Donnelly, and to Paramed nurses and his caregivers, Ruth Cimalfranca, Lyn Ticne, and, most especially, Eunice Gernandizo, who provided such wonderful care to Lou and made it possible for him to remain in the comfort of his home, enjoying visits and calls with close family and friends while surrounded by mountains of books, scientific journals, and paintings, and listening to his favourite recordings, most especially Bach's Goldberg Variations.

Lou  was  a  devoted  father, grandfather and father-in-law, able to both give and receive deep love. At different times in his life, Lou lived in Montreal, Paris, and Toronto, and enjoyed his time in each of his home bases. Lou was also an intrepid and inspiring explorer of new places and ideas. In his ninety-ninth year, he travelled enthusiastically on trips with family to Chicago, New York City and Florida, and was looking forward to his next trip to  New York. Lou's unquenchable zest for life, determination and adaptability sustained him as his health declined. Even in his one-hundredth year, he  regularly went to the office until the pandemic forced him to remain home.

Lou's life-long passion was science.  He  had unlimited intellectual curiosity, which extended far beyond any single field of research. Unique in his ability to predict and promote the next frontier of science, he was a pioneer in molecular biology, somatic cell and human genetics and cancer research. He is considered the father of molecular biology in Canada, a towering figure who made critical contributions into the genetic basis of muscular dystrophy and cystic fibrosis, as well as conducting ground-breaking work in the area of stem cell research. As a young researcher, he successfully fought for the introduction of peer-reviewed research grants in Canada, and played a pivotal role throughout his career advising governments and research agencies with respect to science, policy, and investment.  Fiercely honest and uncompromising in his pursuit of excellence,
Lou was a one-off in the world of Canadian science, not buying into the concept of "dayenu". He was a passionate and relentless voice for the support of basic research (well-known for expressing his opinions persistently through emails and letters), founding editor of many of the world's leading  science  journals, the architect of this country's modern research institute, and the mentor of generations of young scientists and medical researchers.  He particularly relished fostering talented young people, deriving huge enjoyment from his years of interviewing high school students, more than a half- century younger than him, for the Weizmann Institute's summer research program.

We shall not see his like again. A Companion of the Order of Canada, Lou received numerous national and international awards and honours (including the Gairdner Foundation Wightman Award, the Izaac Walton Killam Memorial Prize, the Flavelle Medal, inductee in the Canadian Medical Hall of Fame, he was among the few Canadians to be named to the US Academy of Science), but he was most moved by the creation of the Siminovitch Prize in Theatre twenty years ago because this national award also honours his adored late wife, Elinore, a playwright. The Prize celebrates
their shared commitment to the values of innovation, excellence, and mentorship.  In Lou's memory, donations may be made to the Siminovitch Prize Foundation at www.siminovitchprize.com.

The funeral will be private with a memorial  to honour Lou's extraordinary life and contributions to science at a time when it is possible to gather in person. Arrangements entrusted to the Benjamin's Park Memorial Chapel.

Leave a condolence for Lou Siminovitch