It is with profound sadness that I have just learned of Professor Arthur Perlin’s passing. I was his first graduate student back in 1967 when he moved from Saskatoon to Montreal. When I first met Dr Perlin, I was impressed with his gentleness, kindness, and deep caring for his fellow human beings. He was a true gentleman. He made my three years of study with him an unforgettable experience, helping shape much of my future thinking and the treatment of those working for me. He was my supervisor, teacher, mentor and a father figure to Hazel and myself as new immigrants to Canada. His enthusiasm for carbohydrate chemistry was infectious. He was a beloved teacher setting me on my career path in the pulp and paper industry. My sincere condolences to Mrs. Perlin and the family on your loss. May fond memories of him always be in your hearts as they will be in mine.

Wishing the family of Professor Perlin sincere condolences. Professor Perlin was my organic chemistry professor at McGill in my first year, 1982. He was terrific. I remember him as being a great teacher and approachable. I also remember saying hello to Professor Perlin as I noticed him walking towards McGill on many occasions after that first semester was long gone. He would always be in a happy mood.. May God comfort you May Professor Perlin’s memory be a blessing for you.

Thelma and Mish Granik - 14 days ago

Thelma joins me in expressing our condolences to you and your family on the loss of your husband Arthur and to your children,our cousins, on the loss of their father. May all of you be spared any more sorrow.

My deepest condolences to Mrs. Ruth Perlin and the family on the recent loss of Professor Perlin. I was privleged to be one of his graduate students, and so benefited from both his academic and personal wisdom. As an unexpected bonus, I heard his fine voice leading a wonderful first seder in their apartment on Dr. Penfield. He was always understanding and patient - virtues that not all graduate students experience - and maintained those attribues in the classroom, evoking respect and even love from his students. I was fortunate to speak with him last fall after dropping my daughter at McGill - his voice was strong and his mind was sharp as always, as if 35 years had not passed. The years spent with him in the old pulp and paper building were some of the best.

Barbara and Dennis Perlin - 17 days ago

To Aunt Ruth and the entire family ,our deepest sympathies on the loss of Uncle Arthur - a brilliant , kind, friendly ,humble person and a wonderful husband,father, grandfather, uncle,great uncle , and great great uncle ; a teacher, researcher , and leader in his field; a man of faith; a gentle man who will never be forgotten by all of us who knew him and loved him. May he rest in peace.

I am extremely sorry for that sad news. I will always remember Arthur Perlin as real gentleman and the most knowledgeable expert in carbohydrate and NMR I have ever met. I enjoyed collaborating with him when I was working at McGill. I would like to sent my deepest condolence to his family

As we navigate through life we all encounter people who leave a significant mark on our journey. For me, Professor Arthur Perlin was certainly such a man. Not only did he offer outstanding scientific guidance as my PhD advisor, he was also a role model both as a family man and as a supervisor of students and staff. Professor Perlin was a true gentleman whose words were always carefully measured and delivered in a characteristic melodious voice. Indeed, he was as much at home in the opera house as in the lab. His early training in music led to performances on the stage as a highly respected tenor. He also occasionally took on the role of Cantor in the local synagogue. Several times a year the Perlins would invite our whole group of students, postdocs and technicians to their house for a party. There would be food galore, ping pong contests and Mrs. Perlin would serve up her legendary pies. We got to know the five Perlin children well, all shining examples of an exemplary upbringing. There was singing and talk of bicycling and skiing, activities both Ruth and Arthur practiced into their eighties. It was a delight to witness the love and affection that blossomed in that family. We maintained a connection long after he retired from McGill. I would frequently get calls from him about articles I had written, and he continued to offer valuable suggestions. After he moved into the Kensington Place retirement home, he would arrange for me to speak there and I was always thrilled to see his beaming face in the front row. Indeed, there would have been no such presentations if it hadn’t been for his encouragement to follow my dream of demystifying chemistry for the public. For the last couple of years, when he had become too frail to come down to the lecture, I would always go and visit him in his apartment. We would chat about all sorts of things, from musical theatre to chemistry. He still read journals and kept up to date! My last visit was in February, just before the coronavirus curse hit. Although he was weak, his mind was one hundred percent and his memory probably better than mine. Last Wednesday Arthur Perlin passed away quietly, a victim of COVID-19. He took a little piece of me with him.

Please accept my heartfelt condolences. I am so sorry to learn of the loss of your husband, father, grandfather, and brother . I wish you joyful memories and peace during this most difficult time.

Having worked with Arthur for 5 years at McGill University, PAPRICAN, I feel a huge sense of loss upon hearing of his death! My sincere condolences to Ruth, Anna, and the rest of the Perlin family. When someone you love becomes a memory, the memory becomes a treasure.

Dear Beesh and all the Perlin family, Please accept my condolences on the passing of your father - one of Cape Breton's great exports who truly made a mark on his profession. Nancy and I are linked with you through not only our shared time in medical school and friendship but also through the extraordinary reach of the Cape Breton Jewish community, which has lost one of its fine sons. With best wishes to you all David

Dear Deborah, So sorry for your loss. Deepest sympathies to you and your family at this very sad time . Sheryl

The reading of Arthur's passing created natural feelings of sadness for me; but it rapidly also brought a smile to my face as I remembered my father sharing with our family his excitement in recruiting Arthur, Ruth, and five daughters to Montreal and McGill Chemistry. As for me, in the late 1960's I spent a lot of time wandering the halls of the Otto Maass Building or day-dreaming in the Ruttan Room while waiting ( ….and waiting..) for my father to give me a ride home. I recall during such moments running into Arthur and appreciating his gentle hellos, and sincere enquiries as to how I was doing. Along those lines I would be remiss if I did not also reflect on Ruth's telephone calls to my mother, and her own warm conversations with me if it was me who answered the phone. Mark

I was very fortunate to have Dr. Perlin as my instructor at McGill (Chemistry Department) when i was a graduate student in the 1980's. Professor Perlin was kind, bright, and caring. He was also a brilliant researcher working in the area of carbohydrate chemistry. For example his lab pioneered structural studies of polysaccharides that culminated in the structure determination of heparin (1960's and 1970's). He was also a terrific cantor. My best regards to his family.

Dear Ruth and all the family, I’m so sorry to learn that Arthur is gone. He was such a kind and gentle man. Condolences to you all. 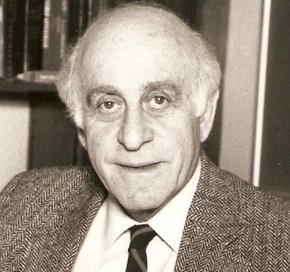 It is with great sadness we announce the passing of Professor Arthur Saul Perlin, a respected researcher and a professor at McGill University. He died peacefully at home on Wednesday, May 6, 2020, just shy of his ninety-seventh birthday. Devoted husband and best friend of Ruth Freedman. Beloved father and father-in-law of Anna and Patrick (Desmoulins), Louise and Jan (Carstoniu), Deborah and Robert (Adams), Myra-Elizabeth and Douglas (Deutschman), David and Mary (Pembrooke). Proud grandfather of Daniel, Jonathan, Ben, Chris, Molly, Adam, and Theo. Dear brother of the late Dr. Irving and the late Freda Perlin, Shirley and the late Harry Dubinsky. He will be greatly missed by his family, friends, colleagues, students, and all those who knew him.

Born in Sydney, Nova Scotia, Professor Perlin grew up working at The Sanitary Dairy owned by his parents, before moving to Montreal to study chemistry (and music) at McGill University where he received his Master and PhD degrees. He was a true renaissance man; he sang tenor, performed as a Cantor at the synagogue, explored the countryside voraciously on foot, bicycle, or skis, and played a mean defense on the ice. He moved to Ottawa to work with the National Research Council (NRC), and snagged the Regional Singles Ladies’ tennis champion, Ruth Freedman, with whom he had five children. The family first lived in Saskatoon, where Professor Perlin headed up the Chemistry Department at the NRC, University of Saskatchewan. The family relocated to Montreal in 1967, when he accepted the EB Eddy Professorship of Industrial Chemistry at McGill and the Pulp and Paper Research Institute of Canada. While at McGill, Professor Perlin mentored countless graduate and post-doctoral students who went on to hold key positions in chemistry departments and industry globally. His research and publications represent major contributions to the fields of organic chemistry and NMR spectroscopy. One of his discoveries about the nature of molecular bonding was named after him: “The Perlin Effect”. He became an Emeritus Professor in 1991 but continued to do research and mentor post-doctoral students.

Professor Perlin will be remembered for his kindness and compassion, his love of his family, his devotion to his work, his passion for opera and classical music, skiing, and travel, and his beautiful tenor voice. Professor Perlin’s family wish to express their gratitude to the staff of Place Kensington, especially Josephine, Cherry and Sandra for their devoted care, and to Dr. Robert Iny, for his sensitivity and compassion in the final days and hours of Professor Perlin’s life. Contributions in his memory may be made to the “Professor Arthur S. Perlin Bursary” c/o McGill University, visit http://www.mcgill.ca/give using code 07744, or by mail: McGill Donation Services, 1430, rue Peel, Montreal (Quebec) H3A 3T3 (noting on memo line: Prof. Perlin, Bursary - alloc. 07744).

Leave a condolence for Arthur Perlin