I will always remember singing in a choir at Young Israel with him. May his memory be a blessing/

Dear Elaine and family, Larry and I were so sorry to hear of your father's passing. Larry fondly remembers listening to your dad's wonderful singing in shul. May his memory be for a blessing. BDE

Dear Elaine and family, I wanted to extend to you a heartfelt condolence on the loss of your dear father, Ted Brandt z’l. May your cherished memories be a source of comfort during this difficult time. BDE.

Dear Elaine & Sons, please accept our sincere condolences on the loss of your beloved Father.

Laura Segall and Family - 13 days ago

Dear Elaine, Brian, Tamara, Yoel, Dina, and Uri, We are so saddened by your father and grandfather's passing. He was a very special man, with an incredible outlook on life. Always ready with a kind word, he was my boys' "buddy" in shull for so many years. From his silly puns to his love for music, he brought smiles to anyone around him. He will be sorely missed, but we were all privileged to have had him in this world for over 100 years! Our most sincere condolences on your loss

Dear Cindy and Elaine, Sincerest condolences on the passing of a true hero, your dad. A survivor who rebuilt his life here, and established a wonderful family. Your dad had an amazing friendship with our cousin , Shimi (Rosenschein) Sternberg, which began on Goyer in the late 1950's or early 1960's, and continued for decades, even after Shimi and his family moved to Harrisburg, around 1964. I know that you have a treasure trove of amazing memories. May you and your families be blessed and have the privilege of following in Teddy's footsteps. BD'E.

Dear Cynthia and Elaine and families, My sincere condolences on your father's passing. I remember fondly the time we spent playing at your house on Goyer while we were growing up, where I got to know your parents, too. Your father was always a kidder and always had a smile on his face. I recently read the lovely article in the Gazette about your father being at the wedding of one of Elaine's sons. My thoughts are with you at this sad time.

Dear Cindy, I was saddened to read of your father's recent passing. It has been several years since we were at Vanier together but I have fond memories of our friendship and of your late parents. I was also touched to see the recent Gazette article about your late father being present for a grandson's wedding. Please accept my heartfelt condolences.

Dear Elaine, I was so sorry to read about your father. Sending you big hugs and condolences. It's been a long time since we've been in touch. Please know you are in my thoughts! Baruch Dayan Ha'emet. Stella Manascu

To Ted's family, I send my sincere condolences to all of you. It was with my late father's help (Harry Issenman) who brought him to Canada. He lived with us for a long time as when he came to Canada he didn't speak a word of English. He came with the clothes on his back, a madolyne, accordian, and a violin. He used to play beautiful music for us, then my father took him to his factory to get him started in his new world. Then he learned English and as I was young when he arrived I lost track of him and then he met the love of his life Anne Price, I remember baby sitting for a short time. He was the nephew of Al and Rose Brandt, my mom's sister, and he was also the cousins of the late Sid Brandt (2020) and Dennis Brandt in Los Angeles. I liked him and he used to call me his baby sister at the beginning. I know he will be greatly missed by his family and part of the family who he never got to meet. May He Rest in Peace and may his memories be a blessing to everyone. BDE Annette Issenman Goldenberg

Elaine,Cynthia and extended family members, when you see Teds picture in the obituaries and then read that it’s Mr. Brandt you reminisce of all the wonderful times I spent at your home as a young teen on Shabbat with both your amazing parents. Oh how I adored them both, they were so kind, your father had the best sense of humour and a smile worth everything. He loved to talk to me about my fathers garage and his this brings me such great memories. Elaine you were so fortunate to have your father with you it was a gift. May the memories you have be cherished in your hearts forever. Baruch Dayan Haemet.

Dear Elaine & family my deepest sympathies on the passing of your father. he was a wonderful & remarkable man & like so many others ,i loved him. my time with him really goes back only to our time at the shaar. may his memory be a blessing to you & your family howard blank

Elaine and family, Our deepest sympathies on your loss. I have fond memories of seeing your boys in shul, take such loving care of Ted. May his memory be for a blessing. BDH

Phyllis and michael david - 14 days ago

Dear Elaine and family... our deepest condolences on the loss of your remarkable father and grandfather.. We always will remember his beautiful singing and friendly smile. He was blessed to live a full and meaningful life after suffering the horrors of the holocaust. May the beautiful memories bring you comfort and may he rest in peace. BDE may his neshamah have an aliyah... Phyllis and Michael and family

Dear Elaine and family, I was so sorry to read about your Father’s passing. I now how much he meant to all of you. For years I used to watch him arrive at your house Friday afternoon, and then off to Shul for all services. Please accept my deepest sympathy, and know that my thoughts are with you at this time. Beverley

The Glatt Family - 14 days ago

To Cindy and Elaine We all have fond memories of your mother and father - visiting them often when we came in for Expos games I know I speak for my boys and of course Barb, when I say he will be miss BDE and may you only know simchas Mark Barb EJ Aaron and Benny

Bonnie and Steve Farkas - 14 days ago

We are so sorry to hear of your father’s passing. Our sincerest condolences to Elaine, Cindy and families. May his memory be a blessing.

Our deepest sympathies to you and your entire family at this most difficult time. Baruch Dayan Haemet. Debbie & Naphtali and family

Dear Family: It's with great sadness that the Young Israel Family extends our deepest condolences on the loss of your dear father, grandfather and great-grandfather, Ted, z'l. As devoted members of Young Israel, Ted and Anne enhanced our congregation in every way and were an integral part of our membership. Ted's attendance at morning classes were a joy for me personally as I would bump into him and be greeted with a big smile, a kind word and always a kibbitz. He had a dry sense of humour and always made the day seem a little brighter with his presence. When he moved to the Waldorf, it was a loss for Young Israel, but we were so pleased that he had enjoyable and comfortable years at the end of a well deserved long life. The article about Ted that appeared in the Gazette a few weeks ago is a lovely testimonial that you can always treasure. May the good memories you share help console you during these most difficult days and may Ted's memory serve as a blessing to all his loved ones. He will be well remembered. On behalf of all the Executive and Members, Frima Rosen, Executive Director

Dear Elaine and family. Our condolences to you and your family on your father,s passing. May special and happy memories help you through this difficult time. Anna and Ivan Lerner. Now in Jerusalem.

Dear Elaine and Family, I'm so sorry to read about the passing of your beloved father. I know what a devoted daughter you've always been to him. May Hashem give you strength at this time to continue in his ways of always being a good and kind person. Baruch Dayan Emes. 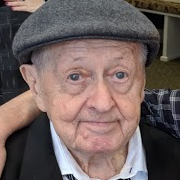 Holocaust Survivor
Peacefully, at the age of 102, Tadeusz (Ted) Brandt passed away of natural causes. He was a survivor of the holocaust and a shining light to us all. Loving husband of the late Anne Price Z’’L. Devoted father and father-in-law of Cynthia (Cindy) and Eli Kipper of Toronto, and Elaine. Incredible and proud Zaida of his grandchildren Michael and Jennifer, Shauna, Jonathan and Eliana, Brian and Tamara, Yoel and Dina and Uri and his great grandchildren Sarah, Naomi, Noah, Zacki, and Nora. He was a special example of perseverance and left us with many special memories. The patriarch of our family, Ted was a survivor of the Majdanek, Auschwitz, and Buchenwald concentration camps. In 1945, Ted was liberated from the Buchenwald concentration camp and determined to move on from the horrors. With tenacity and resolve, Ted arrived in Canada in 1947. It was there where he met Anne and began bearing the fruits to a beautiful Jewish family. With Anne, Cynthia, and Elaine by his side, Ted was able to thrive. He started his own garment business and concentrated on his passions. Ted was a proud musician/vocalist and member of the Chevra Kadisha Choir. He was a devoted member of the Young Israel of Montreal synagogue where he was a committed participant to both the services and classes. He was delighted to attend the Daf Yomi every day. Many thanks to his caretaker Camay and the Waldorf, who really helped him enjoy his last few years. A private graveside service will take place. Shiva private. Donations in his memory may be made to Emunah Women of Canada, (514) 485-2397, or to the charity of your choice.