Dear Vivian and Edgar, my deepest condolences on the passing of your mom, it's been many years but I have fond memories of Tamara, strong and confident, loving and caring, an intelligent woman with so many admirable qualities. The pain you feel now will evolve into a celebration of her life and all the wonderful memories. Wishing you strength during your bereavement, and find solace in knowing that many people care and love you both.

To Tamara's family - the most sincerest condolences on your immense loss. I knew Tamara from quilting. She invited me over to her condo one day as she wanted me to take some books and try to sell them for her. She gave me a tour of all her collectables with stories to go with them. And then there were her teddy bears! Such a talented woman. May all your wonderful memories help all of you at this very difficult time.

Dear Vivian , Ed and family I am sorry to learn of your Mother’s passing. Vivian, I only remember you to be a wonderful, devoted daughter. Lots of old memories crossing my thoughts right now. Please accept my condolences and may you all be spared further sorrow. Rachel

Dear Vivian & Family My sincerest condolences on the loss of your beloved Mom. You were a wonderful, caring and thoughtful daughter. Claire Grief

Vivian and Brian Grant - 13 days ago

Dear Vivian and Edgar, So sad to know that your dear Mother has passed away. We have fond memories of her over so many years. We know she will be much missed. Wishing no more sorrow for you and your family. Vivian and Brian.

Hi Vivian, please accept my sincere condolences on the passing if your mother. i know how dear she was to you. all the best. julie

Dear Vivi and Edgar my deepest condolences on the passing of your mother. May her memory be a blessing. Betty Goldenberg

Dear Vivian and Family, Please accept our deepest sympathies on the loss of your beloved mother. Sharon and Judah Eliahoo

Anita and Sacha Diamant - 14 days ago

Dear Vivian, Edgar and family, Our deepest condolences on the loss of your mother and grandmother. Our thoughts are with you. We have wonderful memories of our friend Mara with whom we spent so many events together, some happy some sad but always there for each other. She will be missed.

Dear Vivi and Edgar I am very sorry for your loss! It was a shock this morning that she died! I have so many memories with both your parents! My condolences to you and the rest of the family!

Dear Vivian. I am so sorry to learn of your mom’s passing. From our conversations I know you were a loving and caring daughter. May your fond memories of years gone by help sustain you at this sad time. Please accept my sincere condolences.

Dear Vivi and Edgar, It was with a sense of shock and disbelief that I learned about Mara's passing. My sincere condolences to both of you and the entire family. Mara was one of the first people I met on my arrival in Montreal and has been a dear friend ever since. She will be enormously missed.

My deepest condondolences on the loss of your mother. May her memories be a blessing. Baruch Dayan ha'Emet

Dear Vivian,Edgar and family, My deepest sympathies on the passing of Tamara. She was a friend of my parents and I remember her that way as well as from our delightful encounters at the library of the University de Montreal when I was studying psychology. She always had a caring smile and was most helpful and kind. I will remember her fondly.

Dear Vivian and Edgar. How sad to hear of Mara’s passing. I met her when she arrived in Israel and she slept in my room. I actually attended your parents wedding although I was a young child. My father, Isaac Tulchinsky. Was a very close friend of the Haichin family. May wonderful memories sustain you at this difficult time.

Dear Vivian and Edgar, My sincerest sympathy on the loss of your dear Mother of blessed memory. May you be spared further sorrow and may her memories be a comfort to you all. BDE Agneta

Dear family of Tamara, My thoughts are with you on the loss of Tamara. Fond memories of Tamara and her golden hands creating in the craft centre. May her memory be a blessing, Riva Fenster

Dear Vivian and Edgar, I was saddened to learn of your mother's recent passing. Although it has been several years, when I saw your aunt's obituary the other day I immediately thought of swimming at the Hill Park apartments. Now when I see your mother's obituary so soon after, I think of many wonderful childhood times on Grosvenor. Please accept my heartfelt condolences.

Dear Vivi and Edgar, my heart goes out to you and all who loved Mara for your loss. I have fond memories of your mom during family gatherings; of her caring interest in all of us and the twinkle in her eyes as she shared insights and humour. With fondness, Larry

Dear Vivian and family. My heartfelt condolences on the passing of your mother. I always admired that you were there, with love and devotion, to care for her. May your treasured memories be a source of comfort at this difficult time. Fondly Janet.

Nancy and Stephen Engels - 15 days ago

Dear Vivi and family, so very sorry for your loss. Your mother’s beauty and accomplishments are lovingly expressed. May her legacy be a blessing to you and yours. Nancy and Stephen Engels.

Dear Vivi and family, My sincere condolences on the passing of your wonderful mother and grandmother. Tamara and I met many years ago in a jewellery class and became instant friends. She was an extremely talented lady, smart and well read, and every conversation with her was a pure pleasure. We celebrated birthdays together and other happy occasions. I shall miss her greatly. May her memory be for a blessing.

My most sincere condolences to Tamara's family. Tamara and I were both members of "Cuilte " Montreal, a quilt guild in NDG. She was a very talented woman. We had wonderful conversations about so many interesting topics. She was an educated, fine and classy lady. BDE

Dear Vivian and Edgar, My sincerest sympathy on the loss of your dear Mother of blessed memory. I will always remember her with a smile on her face as we met in the garage either coming orn going. Your devotion to her was exemplary. “May you be comforted amongst the mourners of Zion and Jerusalem”. BDE

Our deepest sympathy to all the family.

Dear Vivi, Eddie, Alex and Amanda, I am so sorry for the loss of Dear Tanti. She will be greatly missed at our family gatherings, and every day. I know you all gave her such beautiful care and love, especially to surround her and give her peace in her final sleep. Sending hugs and love to you all. I will always remember her dolls and stuffed animals, and going to her house to sew little dresses for little mice as a child, and pixie. Xoxoxo

Dear Vivian, my deepest condolences on the loss of your dear mother. I'm sorry I never had the opportunity to meet her. She must have been a wonderful person, and a wonderful mother. My thoughts are with you and your family at this sad time, and I am always here for you.

My dear Vivian & Family, I am so saddened & shocked to read about your Mom s passing. You were an amazing daughter, so devoted, loving & always there no matter what. This has been a very hard week for you, 2 loving people gone within a few days! May you & the entire family be spared from further sorrow . Keep the warm, loving memories close to your heart ❤️ & she will always e with you. Thinking of you , hugs, Rhona 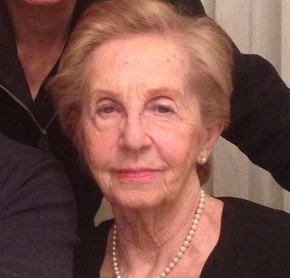 After leaving Romania and arriving in Canada, Tamara studied at the Université de Montréal and with a master’s degree in Library Sciences, became the Chef de services of the Psychology and Education Library at the University until her retirement. She had hands of gold and made many beautiful things, from heirloom quilts to jewelry to collections of stuffed teddy bears. Tamara traveled the world and kept diaries of her travels. Above all, she was an awesome mother, grandmother, aunt, and friend.

Leave a condolence for Tamara Rosenthal